Looking for trendy beard style ideas in 2020? With the success of our previous article about Top 5 Beards of  Football Players, we are proud to bring you another Top 5 Football Players who rocked the FIFA World Cup with a beard.

Whether you’re a fan of football or not, you always have one friend who’s a fanatic about it and won’t stop talking about it. With the upcoming FIFA World Cup in 2022, it's already been seen that footballers-turn-hipsters decided they’d had enough with an ordinary looking set of facial hair and with that being said, we present to you an extra top 5 selection of top players who have the wildest beards.

Jimmy Durmaz – Sweden. Durmaz is Swedish. His Assyrian parents made their way north to Sweden from Turkey. Currently, Durmaz plays for the French football club Toulouse as a midfielder; he was signed in 2016. During the 2018 World Cup in Russia, he has been rotated in as a substitute for the Swedish national squad. He has a long stylish beard that’s really hard to maintain, but he does it very well and makes it look even cooler! His trademark stache is known as ’mustache of hope’.

Adil Rami – France. Rami is a French professional footballer who plays as a central defender for Turkish club Fenerbahçe. Rami was a member of the France squad that won the 2018 FIFA World Cup. Rami began his football career playing for amateur club Étoile Fréjus Saint-Raphaël, then known as ES Fréjus. Adil’s beard is unique but his moustache demands your attention. He donned the punjabi style beard which gives him the Maharaja look.

Lasse Schone – Denmark. Schone is a Danish professional footballer currently playing for Genoa C.F.C. and the Denmark national team as a midfielder or winger. He is known for his free-kick and shooting ability.Schöne scored on his full international debut in 2009 and was part of the Danish squad at UEFA Euro 2012 and FIFA World Cup 2018.His style of beard might seem similar to that of David Beckham but, it suits his face a lot and he does ensure that it’s on point and well trimmed.

Ásgeir Börkur Ásgeirsson - Iceland. Ásgeirsson is an Icelandic footballer who plays as a midfielder for Handknattleiksfélag Kópavogs. Ásgeirsson is a former member of a heavy metal band, and likes to listen to rock music when preparing for games. Not only is it hard to carry style, but his beard is also multi-color which makes it one of the rarest styles in the world! 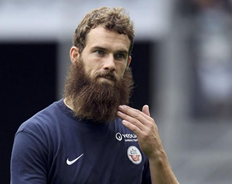 Matthias Holst - Germany. Matthias Holst is a German footballer who currently plays for Rödemisser SV. A reject from Barcelona’s academy, this player moved away to Scotland before ending up in Mexico. His beard is special, only a select few can wield such an outrageous statement of manliness.

Who is your favorite bearded football player ? Feel free to drop your fav in the comments below !